Employee of the Week 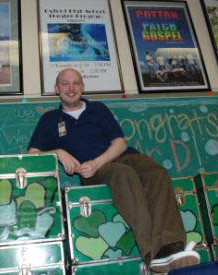 “I get to play all day and at the same time raise students' expectations of themselves. I get to inspire, motivate and make a difference while doing what I love, which is creating quality theatre. To top it off I get to create theatre with students who are not even aware of their capability! That in turn is inspiring to me.”

John Davenport came to Oxford High School the spring semester of 2000. He literally waltzed into our lives and endeared himself to us with his youth, talent, energy, creativity and courage. Without blinking an eye, he took the cast of Cinderella, which he did not choose (the show or the cast) and began working his drama magic. In 2001 John Davenport came as our guest to cast and direct Guys and Dolls.

The following fall he came to stay, not just to "play"! John Davenport took on one show on the heels of another, casting, rehearsing and performing; he has literally lived at school with his casts and crews. John Davenport recalls the summer of his thirtieth birthday, when he was directing his thirtieth show at OHS, and they just kept on coming.

Thirty-six shows later, John's dedication and talent were recognized with an invitation for Oxford High Theatre to represent Mississippi and the United States this August in the American High School Theatre Festival at the Edinburgh Fringe Festival in Edinburgh, Scotland. Kudzu did not take the Festival by surprise. News of John Davenport and Oxford High School's talent and success preceded them. Audiences and critics alike were satisfied there had been no exaggerations. Receiving standing ovations and Five Star Ratings, John Davenport and the cast and crew of Kudzu are First in Class in Oxford ~ ~ ~ and in Edinburgh too. Kudos to you, John Davenport.