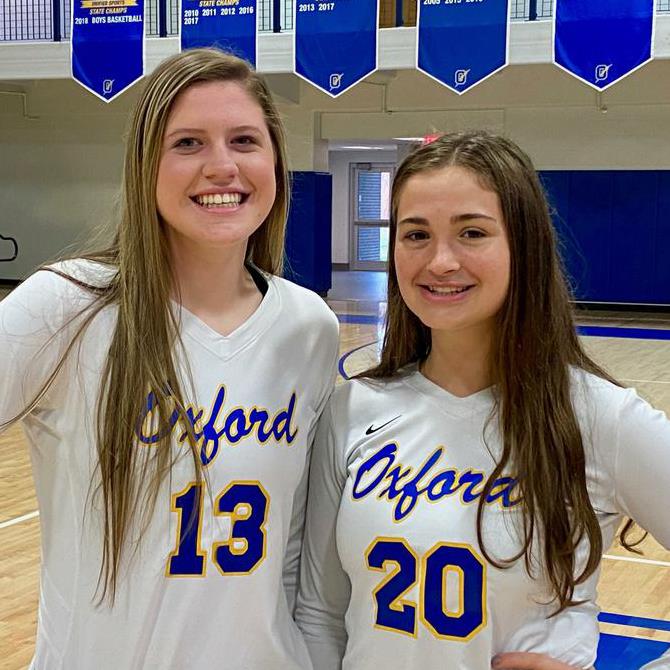 Oxford, Mississippi (November 10, 2020) — Mississippi Association of Coaches announced the 2021 All-Star Volleyball teams, and two Oxford High players will be representing the north: Catherine Bianco and Ainsley Tacke. The Oxford Charger volleyball team finished its strong 2020 season in the second round of 6A playoffs with a loss to Desoto Central.

Junior, Catherine Bianco, a setter for the Chargers, reached her 1000th assist during Olive branch game at Tupelo Volleyfest Tournament. She finished the season with a total of 641 assists for the year and 1397 total career assists. Bianco also landed a triple-double and career-high in kills against Lewisburg High where she achieved 13 kills, 21 assist, 11 Digs. She had 6 double-doubles on the year.

The 6-foot-1-inch junior, Ainsley Tacke plays right-side for the Chargers and ended the season with 274 kills and 138 digs. Tacke reached a career-high of 10 aces, 16 kills, and 11 digs against Lewisburg High. She had a career-high in kills (21), a double-double, 21 kills, and 10 aces against Hernando High. Tacke's career-high in digs was against Starkville in the first round of the 6A MHSAA playoffs.

Bianco and Tacke will play in the 2021 All-Star Volleyball game on Wednesday, July 14 at Hangar Dome on the campus of Millsaps College in Jackson, Mississippi.