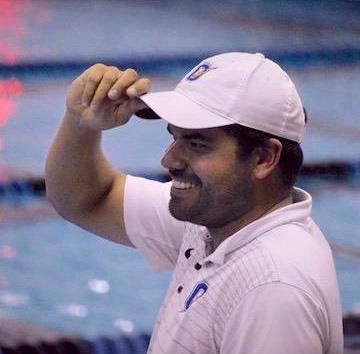 Oxford, Mississippi (September 25, 2019) — OSD Swim Coach, Robert Gonzalez, has been named MAC (Mississippi Association of Coaches) Swim Coach of the Year. His nomination will move on to compete with eight other southeastern states, the winner will then go on to the national MAC conference.

Gonzalez, a science teacher at Oxford Intermediate School, is in his 5th year of coaching Oxford's swim team. Gonzalez is an Accredited Interscholastic Coach (AIC) and a Certified Interscholastic Coach (CIC). Gonzalez has worked in the sport of swimming since age 4 and was a junior national qualifier. After high school, he attended Mississippi State University and coached Starkville High School and their club swim team. Following graduation in 2012, he took his first teaching job at Tunica Middle School and coached the inaugural swim program at Rosa Fort High School.

Gonzalez led the 2017 and 2018 OHS swim team to third in the MHSAA state championships, whereas they were unranked in previous years. Last year, the boys finished with an overall record of 40-4 and the girls finished 42-2.

“Our program is proud and honored to receive this award because that is exactly what it is: a collective effort. I personally am proud that the voters recognized our team’s improvement moving into where we are today. No program in our state has seen the climb upward more than we have the past five years. We are moving in the right direction and we have a lot of untapped potential I hope to see discovered,” said Gonzalez.