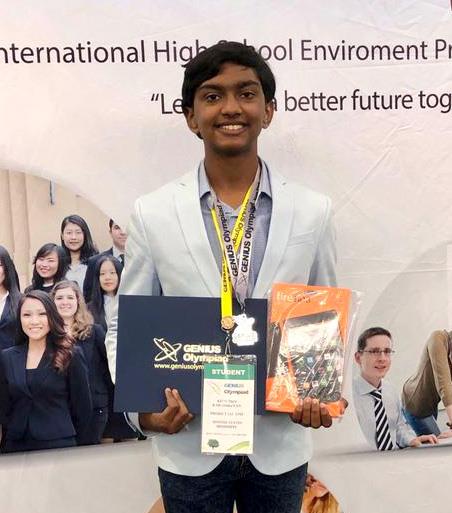 Oxford, Mississippi (June 27, 2019) — Rising 9th Grader, Keerthin Karthikeyan, won “Silver Medal” at GENIUS Olympiad International Project Competition at SUNY Oswego in New York City, with his project “Styro-Carbon: An Effective Approach to Recycle Sytrofoam”. GENIUS Olympiad is an international high school project competition about environmental issues where over 1500 participants from 79 countries and 43 States For the Science category alone, there were 842 projects. Karthikeyan presented his project through five rounds of judging resulting in the silver medal that is given to the top 90% of participants. As a silver medalist, he is invited to submit his research to the International Journal of High School Research to have it peer-reviewed and published.

Karthikeyan is no stranger to science competitions, his work on recycling styrofoam won first place in April at the state science fair, including the NASA Earth System Science Award and Best of Fair. He won seven awards at the regional science fair in March, including the Genius Award that landed him an invitation to the national competition at SUNY Oswego.